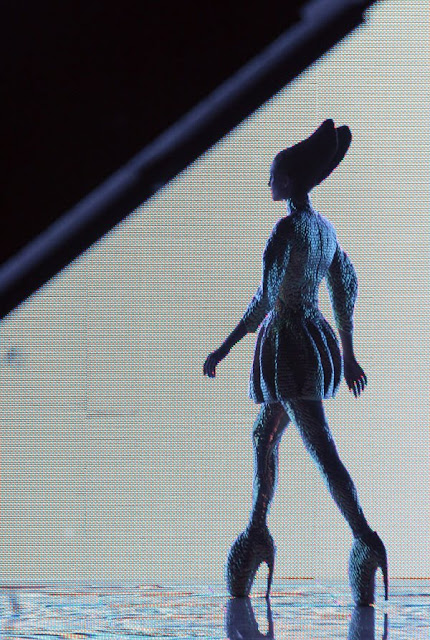 Let's get one thing straight, I love heels, and on more than one occasion have thrown my budget out the window in order to purchase a pair. They not only produce that beautiful arc in a woman's body (observe Élise Crombez in Gucci) they transform her. In some primal, subconscious way, height still connotes power. So yes, I love heels...I just don't like wearing them. 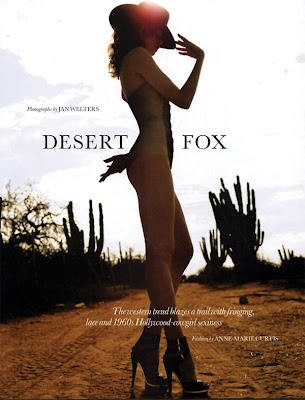 1) They hurt like hell.
2) They don't do well in the rain (and it rains a hell of a lot here.)
3) Can't ride a bike in heels (I've tried, and almost ended up under a bus.)
4) They get stuck in crevices (and I live in a town paved in cobblestones.)
5) Don't have the right feet for them (not narrow enough) and hence...
6) They HURT. LIKE. HELL.
Jane Aldridge, I have no idea how you do it but I suspect it's because walking isn't something they do in Texas. Besides, did you know that a 110 lb. woman in stilettos exerts 15 times more pressure in one step than a 6000 lb. elephant? This is because, as high school physics taught us, pressure is directly proportional to the force acting on a body, and inversely proportional to the area in contact with the force. Walking in a stiletto heel throws off your center of gravity and means you distribute a huge amount of force across a surface with an area of one sixteenth of a square inch...which isn't good news for your ankles, knees, or hips.
And yet, rejoice, votaries of the shoe! Shoe technology is becoming more and more sophisticated. 'Shoemakers have come up with a less painful design by integrating technology already found in athletic shoes. Recently, high-heeled shoes were released with pouches of gas similar to those found in running and basketball shoes....These pockets distribute weight more evenly across the shoe, so the shift in center of gravity, as previously discussed, is minimized.' Ah, tragically, it turns out that you do get what you pay for when it comes to footwear. More dollars = less pain. (So really, that pair of Lanvins are a health investment, right? RIGHT???)
Alright, enough geeking-out, because we all know that none of this matters when you lay eyes on a pair of these babies: 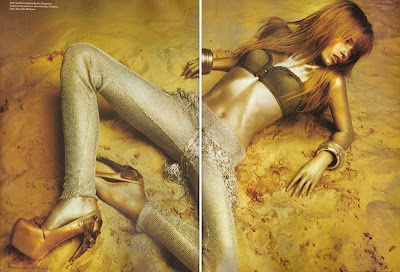 (I mean the shoes, but Abbey Lee ain't bad either.)
Or these: 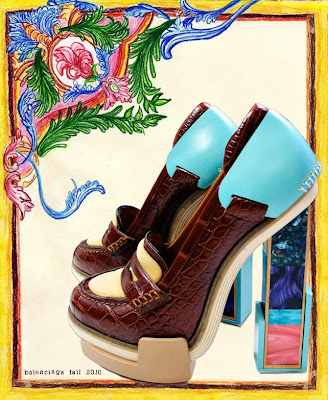 Balenciaga, via seaofshoes
Or these: 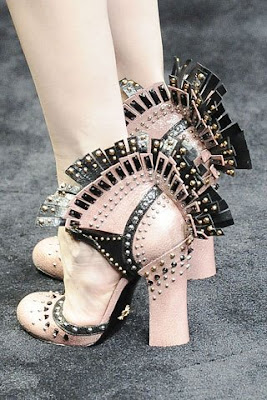 Prada F/W 2010
Mind you, I despise Carly Bradshaw or whatever her name is and that whole band of Sex in the City harpies who won't shut up about their Manolos. They perpetuate that easy stereotype that fashion is frivolous and anyone who appreciates it is idle and vapid. Beyond the health risks, heels can be incredibly dangerous. Abbey Lee, Sasha Pivovarova, and Natasha Poly famously refused to walk in Alexander McQueen's S/S 10 show for fear that a fall in the armadillo shoes could result in serious injury. A young British girl recently died after slipping on a subway platform while running in heels. In response to this tragedy, Tanya Gold wrote an article in the Guardian declaring her deep loathing for fashion. I (respectfully) disagree with a lot of her arguments, but for now I'll just focus on one.
She claims that fashion is imbecilic because it fails to make us happy, and fails 'to make even itself happy.' The problem with this of course is that she is conflating fashion with the garment industry. They are related, to be sure, but the idea that buying a product will make you happy is the crux of the consumer ethos: it's the notion that fuels the capitalist machine. Fashion is something altogether different. Fashion is a form of art as legitimate as painting, or film, or photography, or sculpture. It's the difference between a Hollywood blockbuster and a Stan Brakhage film. Both are films, but they serve entirely disparate functions. Designers like Alexander McQueen and Yves Saint-Laurent (I could go on) weren't just trying to dupe us into buying their clothes, they aspired to be visionaries, and they were. The best shoes are works of art, and art has never professed to make anyone 'happy.' Ars gratia artis, after all.
Posted by SheSpoke at 23.7.10