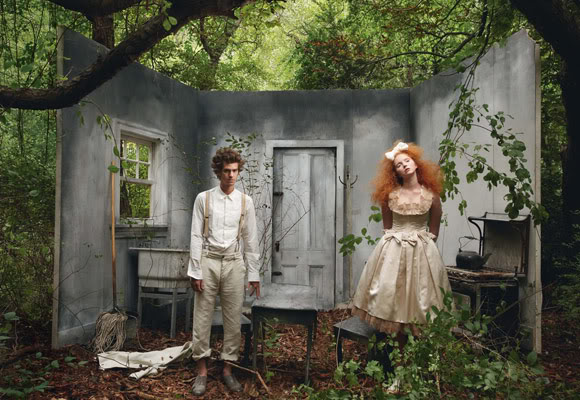 Lily Cole and Andrew Garfield shot by Annie Leibovitz for Vogue US, December 2009; styled by--who else?--Grace Coddington.
Recently, the impossibly awesome Lily Cole (whom I met one night in our student-run bar--in her inimitable, soft-spoken way she told me how excited she was about going to Venice that weekend, modestly neglecting to mention of course that it was for Salma Hayek's wedding...) ahem, Lily Cole and a few friends started a fascinating project called The North Circular, which produces fashionable knitwear made by grannies exclusively from the wool of rescued Wensleydale sheep (who are raised on organic pastures). 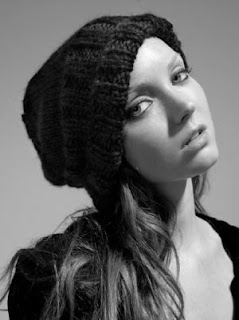 In their words: ‘We wanted to return value to the hand made product, personalize the process of production, rekindle the relationship between the producer and the purchaser - knitter and scarf wearer.’ More than simply creating green products, The North Circular resists the alienation of the worker from her product by putting buyer directly in contact with knitter, encouraging them to communicate and share their mutual appreciation. Marx would be proud. It’s truly a testament to innovative, enterprising, and environmentally-responsible thinking.
And yet…I am torn about green. Don’t get me wrong, I’m all for the environment and wish that more designers would take a page from the book of Phillip Lim, creating beautiful things with sustainable fabrics. But I can’t help thinking that the Green Movement has moved a little too thoughtlessly, a little too automatically, and as a result is in danger of becoming itself unsustainable.
When I think green I find myself wondering whether or not we’ve considered all the angles…Does the fact that my blazer was made in Bangladesh and has a bigger carbon footprint than a woolly jumper knit by a Scottish granny necessarily make it worse? If I stop buying products from abroad, does my decision jeopardize someone else's employment? Is there a dangerous side to ecocentrism? Is it a kind of modern religion—the insidious creation of a shared object of devotion that ignores the problems of broadly imposing rigid beliefs? Can shopping locally also become the justification for protectionism, or worse, xenophobia? 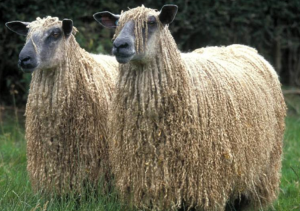 While pondering these ponderings, I came across a fascinating piece of history in the form of an old animal-rights protection law that begins:
‘(1) It is forbidden to unnecessarily torment or roughly mishandle an animal.
(2) One torments an animal when one repeatedly or continuously causes appreciable pain or suffering; the torment is unnecessary in so far as it does not serve any rational, justifiable purpose. One mishandles an animal when one causes it appreciable pain; mishandling is rough when it corresponds to an unfeeling state of mind.’*
Would it surprise you to learn that this was the Tierschutzgesetz, signed into law on November 24th, 1933 by none other than Adolph Hitler? In fact, he passed three of these groundbreaking environmental protection laws, which, philosopher Luc Ferry has provocatively argued, makes the Nazis one of the greenest governments of the modern world.
But how do you even begin to reconcile this thoroughly genuine concern for the environment with the most callous, systematic destruction of human life that has ever occurred? We need to think about the principles upon which ecophilia is based: the atavistic love of nature necessarily idealizes the ‘past’, mourning the desecration of the natural world at the hands of human civilization. This kind of sentimentality frames man as an antinatural being, whose progress is predicated on the destruction of all that is green and good. If we’ve seen this kind of logic upheld by ecoterrorists, perhaps it’s not so difficult to see how at once Hitler could bear such love toward his dog and such vicious hatred toward his fellow man.
I am of course not suggesting that environmentalism is in itself dangerous, but it’s worth keeping in mind that when large groups of people start advocating beliefs without thoroughly considering their implications, our solutions can become perilous problems. I’ll conclude this post with a few words from someone far wiser than I:
‘It would be wrong to sophisticate away the growing ecological and environmental mission, all the more wrong because it would be so convenient; wrong to let such important problems slide just because they are ethically and tactically complicated; wrong, also, not to think them through from many angles. If we can understand how some people came to care, in politically and intellectually responsible ways, about present and future life on this planet as a collectivity, we can hope to expand the ecologically minded community and its wisdom. That may in turn expand, in space and time, in however small and gradual a way, the niche in which life makes its beauties and finds its joys.' - Robert N. Watson, Back to Nature: The Green and the Real in the Late Renaissance. 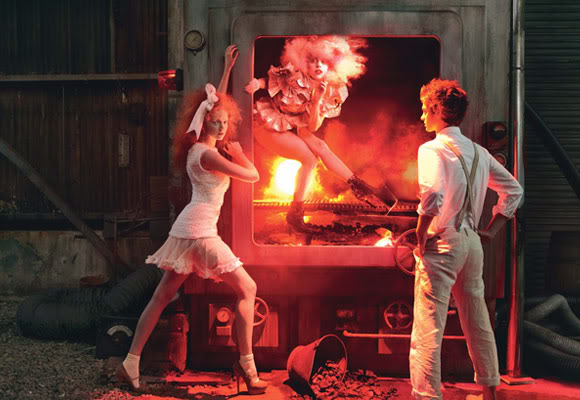 Images courtesy of Vogue and The North Circular.
Posted by SheSpoke at 13.5.10